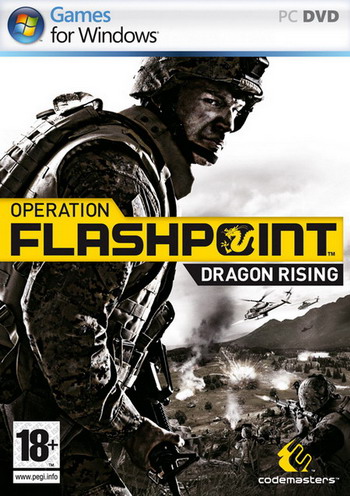 The other Spiritual Successor series to the acclaimed Operation Flashpoint trilogy from 2001-2002. Developed and published by Codemasters, without any input or co-operation from the original developers of the franchise, Bohemia Interactive Studios.

To clear up and explain the situation a bit for troping gamers: After finishing their work on Operation Flashpoint, the developer Bohemia Interactive Studios and publisher Codemasters had a major falling out and split ways. BIS took the rights to the engine, Codemasters got the rights to the name. BIS has since upgraded the engine for the sequel ARMA series, while Codemasters developed its own "official" sequel, Operation Flashpoint: Dragon Rising. Essentially, the BIS sequels closely resemble the original, except they have much better graphics and improved gameplay, while Dragon Rising feels, well, different from the original OFP, and a lot of old veterans seem to think that it suffers from New and Improved Syndrome.

The plot of the game itself takes place in the near future, when the People's Republic of China adopts an expansionist policy and tries to capture several rich new mineral deposits in various neighbouring regions of Asia (many of the old reserves have been depleted, particularly those of fossil fuels). The latest target for the Chinese is the (fictional) resource-rich island of Skira in the icy waters of the North Pacific, formerly a Russian and Japanese disputed territory. The NATO forces are called in for help and the inevitable clash with army of the PRC starts from there.

The sequel, Operation Flashpoint: Red River is the first game in the wider franchise (including the original BIS games) that takes place in a real country: Tajikistan.

Works in this series:

Not to be confused with the Canadian series Flashpoint.

For the main rival of this series, see the Spiritual Successor created by the original developers, ARMA.

NOTE: Please do not list any entries related to the original Operation Flashpoint series here. They have their separate page.