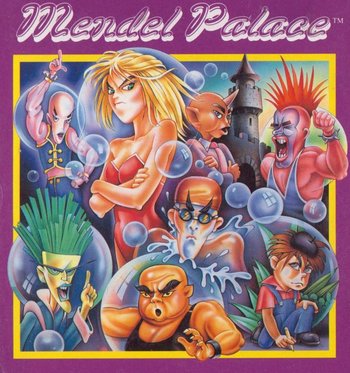 Mendel Palace (known in Japan as Quinty) is a 1989 game set in a fantasy world where a player has to fight animated dolls in search of his younger sister, a witch (named Quinty in the Japanese version) who took his girlfriend away (in the American version, it's a princess, but the concept's still the same). To achieve this, you have to travel through eight different dollhouses (comprised of ten rooms each, the last room being a boss battle) and attack the enemy dolls by flipping the panels from underneath them to send them flying into the wall. Once you've done that, you get to enter the witch's palace and fight her on her own turf to win back your sweetie.

This was the first title developed by Game Freak, who are better known nowadays for their work with the Pokémon franchise.

Originally published by Namco in Japan and Hudson Soft in North America, Mendel Palace/Quinty didn't see any re-releases for 30 years, when it became part of the Namco Museum Archivesnote Namcot Collection in Japan with a host of other Namco-published and developed NES/Famicom titles.