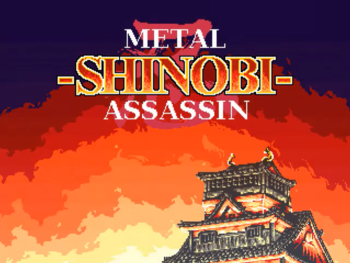 The title screen. Also the only instance of English being used in this game.
Advertisement:

Set in what appears to be Feudal Japan (albeit a high-tech version different from the one we know of) torn by war and chaos, the powerful tyrant, Lord Tokugawa rules the lands from his mansion, and rumors have it that Tokugawa is empowered by some unknown supernatural forces to maintain his eternal dominance.

You are an elite ninja assassin, the Metal Shinobi, and after surviving the ravages of war, you decide to put an end to Tokugawa's rule. Armed with your most powerful, high-tech weaponry, assorted equipments and your ninja armor, you embark on an assasination attempt into Tokugawa's mansion.