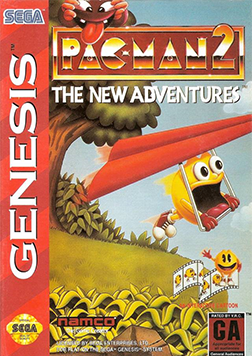 Pac-Man 2: The New Adventures (Hello! Pac-Man in Japan) is a game in the Pac-Man franchise for the Sega Genesis and Super Nintendo Entertainment System. The plot focuses on Pac-Man doing random tasks for his family while having to deal with the ghosts, who are now working for the Ghost Witch of Netor. Unlike the original game where you control Pac-Man, this game has you act as an off-screen helper that directs Pac-Man through the game by shooting at things with a slingshot. However, this is complicated by the fact that Pac-Man has his own mind and his mood is affected by the things the player has him interact with. In turn, his mood affects his willingness to cooperate.