Spark of the Rebellion 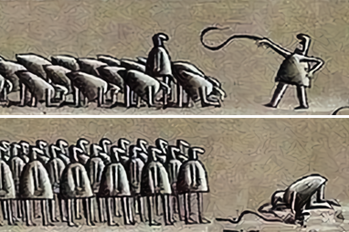 "When one stands up, they all stand up."
"When the Empire's operations are targeted on an ongoing basis, it could signify more than the theft of a few crates; it could signify the spark of rebellion. Next time they make a move, we'll be waiting for them — to snuff out that spark before it catches fire."
— Agent Kallus, Star Wars: Rebels, "Spark of Rebellion"
Advertisement:

When a relatively minor act of defying the authority (such as a Defiant Stone Throw) or a similarly minor act of oppression by said authority (e.g. accidentally shooting a future martyr) serves as a catalyst for a massive rebellion against it. Sometimes, the two options are rolled into one (defiance followed by crackdown), in which case the ur-rebel may experience a Dying Moment of Awesome. If they survive, on the other hand, they have a good chance of becoming a Rebel Leader. May also go hand-in-hand with Hope Bringer if the rebellion was seen as futile prior to this act.

Maarva pre-records a speech to be played at her funeral, telling the people of Ferrix to fight the Empire!

Maarva pre-records a speech to be played at her funeral, telling the people of Ferrix to fight the Empire!