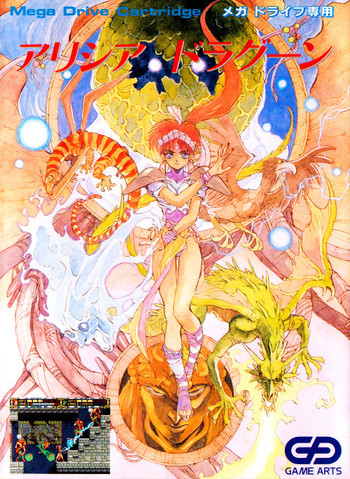 Alisia Dragoon is a side-scrolling Platform Game developed by Game Arts in association with Gainax. It was released in 1992 for the Sega Genesis.
Advertisement:

It follows the adventures of a barbarian warrior sorceress, Alisia, and her four familiars - Dragon Frye, Thunder Raven, Boomerang Lizard, and Ball O' Fire - as they seek to stop the revival of the demon Baldour, whose followers tortured Alisia's wizard father to death in front of her when she was young. Standing in their way are Baldour's followers and minions, highest among them his aide, Ornah.

Alisia herself uses Thunder Magic, which auto-aims at nearby enemies. The game is a combination of platforming and shooting, and a cautious attitude helps; Alisia's magic needs to be recharged between each shot, as well as the familiars' attacks. Dragon Frye shoots up to three fireballs, Thunder Raven takes the longest to charge up but has quite a payoff with a massive thunderclap that damages everything onscreen, Boomerang Lizard throws up to three homing boomerangs from his back, and Ball O' Fire can be manipulated into ramming enemies to do damage and absorb projectiles.