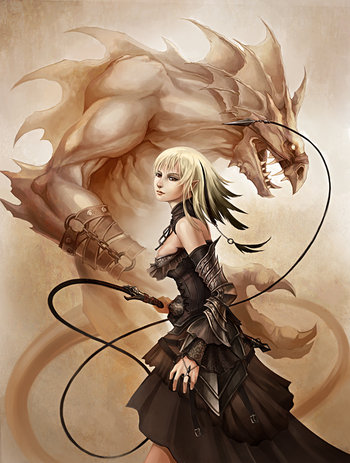 "This is a private battle of wills between the manufactured savagery of the Capitol's mutt and the horse-magic that runs through Blight's veins. The mutt screams. Rears. Canters around. And finally breaks."
— The Lumberjack and the Tree Elf
Advertisement:

A type of character who uses the assistance of an animal, force of nature, or just some sort of not-highly-sentient creature (with free will) to help them fight.

There are a few variations to this:

In video games, the Beastmaster either has complete control over their ally (perhaps via RTS controls or assuming direct control), indirect control over the ally via Squad Controls ("attack on my mark"), the ally follows a "Monkey-see, monkey-do" mentality and mimics the master's actions ("attack when I attack"), or the ally just does what it wants in range of its master ("...I wanted you to attack anyway"). In the latter case the playerbase may regard the job as unpopular as the AI isn't always very good at doing actions that don't kill everyone. This will normally not be the case in other forms of fiction, as no computer is directing the ally's actions, that's now the plot's job.

Due to the fact that the ally is, at best, another damage dealer/damage taker, Beastmasters are generally able to do things on their own in an MMORPG environment. The Beastmaster is often an Animal Lover too.

Attack Animal and/or Summon Magic are common options for the Beastmaster's Weapon of Choice, but martial variants exist, often wielding An Axe to Grind, a Blade on a Stick, or being an Archer Archetype. May overlap with Fluffy Tamer. When associated with nature, tends to also be a Classical Hunter. Not to be confused with The Beastmaster, which was a 1982 fantasy movie and a 90's show about a Nature Hero, very, very loosely adapted from a 1959 science fiction book series, or the Shoujo manga Beast Master, which has a completely different story.