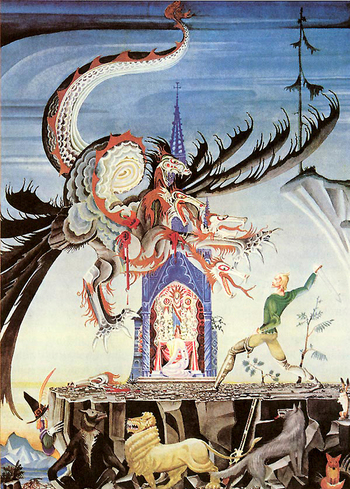 "The Two Brothers" (Die zwei Brüder) is a Fairy Tale collected by The Brothers Grimm.

The version the Grimms included in Children's and Household Tales has two distinct sections, which may have originally been separate tales; they mention in an afterword having also collected stories that resemble the first section with a different ending or the second section with a different beginning. Other fairy tale collectors have had similar finds; for instance, Andrew Lang's Violet Fairy Book includes a Lithuanian tale called "The Three Princes and Their Beasts" which resembles the second section.

The first section tells of two brothers, one a rich and wicked goldsmith and the other a poor and humble broom-maker. The broom-maker discovers a rare golden bird, which the goldsmith buys off him. The bird is magical, and whoever cooks and eats its heart and liver will find a gold coin under his pillow each morning. The goldsmith sets his wife to cooking the bird, but due to a mishap, the bird's heart and liver are eaten by the two starving sons of the broom-maker. The broom-maker is astonished when his sons start finding gold under their pillows, and asks his brother for advice. The goldsmith vindictively claims they've fallen in with the devil, and must be driven out. After wandering for a while, the two boys are taken in by a huntsman, who raises them as his own sons.

In the second section, the two boys (who incidentally are identical twins) are young men and set out to seek their fortunes. First they travel together, and acquire a matching set of faithful animal companions: in order they are hares, foxes, wolves, bears, and lions (all of which are also twins, or at least littermates). Then they go their separate ways, and the story follows the younger brother, who saves a princess from a dragon and wins her hand. They live happily for a while until the young man goes hunting in a mysterious forest, where a witch turns him to stone. The elder brother, having received a portent that his sibling is in trouble, comes to visit and is mistaken for his twin. He lets the mistake stand so he can borrow his brother's authority to find out what's going on, then goes out to the forest and rescues his younger brother from the witch. The brother who is married to the princess, though grateful to be rescued and glad to be reunited with his sibling, has an attack of jealousy when he learns that his elder brother has been living his life, but is reassured when he gets home and his wife asks him why he has been behaving strangely distant and sleeping separately from her for the last few days. The end.