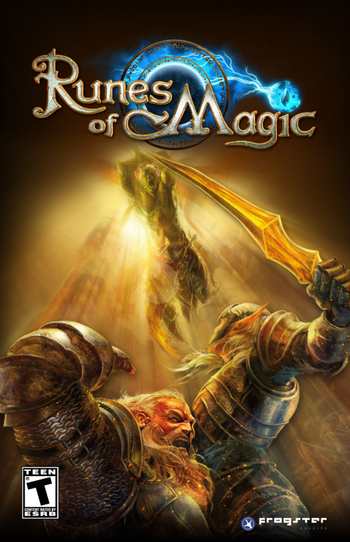 A long time ago, the god Ayvenas created a book, in which he captured the shape of the world and recorded the origin of life. The book's name was "Taborea".
Advertisement:

Runes of Magic is a "free to play" MMORPG, developed by Runewalker Entertainment. Though developed in Taiwan, it became surprisingly popular in America and Germany after another company called Frogster Interactive translated it into English and German.

It is often criticized for being very similar to World of Warcraft, to the point of some calling it a rip-off. Even its fans are willing to admit this if you press them. Nevertheless, it has met with great success, and the number of players who signed up on both the launch of the open beta and the full game were unprecedented for a free-to-play MMORPG. Thanks to an online "item shop" where players can buy "diamonds" with real money in order to get items, extra character customization, and gameplay conveniences, plus boxed versions being sold in Europe, Frogster and Runewalker still manage to make a profit off it despite its "free-to-play" status.

The game is set in the High Fantasy world of Taborea, specifically on the continent of Candara. In ancient times, Candara was the homeland of Taborea's exceedingly proud humans, but that civilization was destroyed in a robot uprising. Some humans survived on the nearby continent of Kloyida, however. They are now in the process of rediscovering the Lost Technology of the Ancient Kingdoms and recolonizing the ruined land of Candara.

Players start out in a small mining colony where they are introduced to the world and gameplay, then promptly set off into a Wide-Open Sandbox.