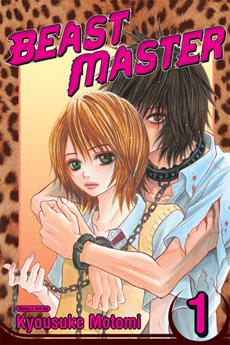 Yuiko Kubozuka is a high school student who loves animals with a burning passion, though animals unfortunately hate her and flee from her whenever possible (usually causing damage to her in the process), prompting her friends to say that she should focus that energy on a boyfriend. She, of course, isn't all that interested, until one day, while attempting to retrieve her (unwilling) cat from the local park, a mysterious boy with a wild look in his eyes brings it back down with little trouble. She thinks little of it until the next day, when the boy transfers into her class. His name is Leo Aoi, and, despite his fierce expression, he's really a sweet, naive, gentle hearted teen - at least, until he sees blood. When Leo sees blood... Well, let's just say that he isn't exactly human when he sees blood...

Because Yuiko is the first to see beyond his frightening expression, Leo quickly becomes strongly attached to Yuiko, who is his first friend. Yuiko is unique in her ability to calm Leo down when he goes into one of his rages, and slowly, they begin to fall in love. However, soon, Leo's past starts to catch up with him, and it threatens to rip the couple from each other's arms.