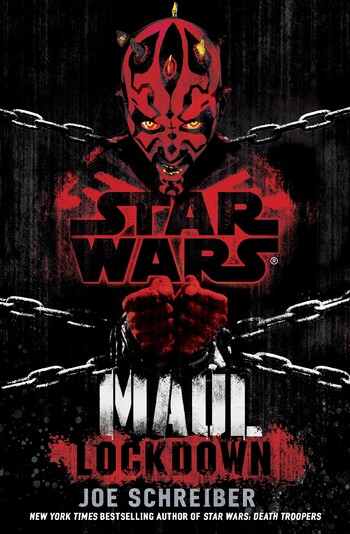 "The sheer power of the Dark Side is never more dangerous then when it is cornered."
Advertisement:

Maul: Lockdown is a Star Wars Legends novel written by Joe Schreiber. Released on January 28, 2014, it's notable for being the penultimate Legends book published by Lucasfilm, followed only by Honor Among Thieves before the Continuity Reboot by Disney on April 25.

One year before the events of The Phantom Menace, Darth Maul has willingly entered the Outer Rim prison Cog Hive Seven, a Wretched Hive which doubles as a death match venue where the prisoners fight one another. He has been sent by Darth Sidious to find the Arms Dealer Iram Radique, who is rumored to secretly run his operations out of the prison. Sidious told his master, Darth Plagueis, that Maul is to assassinate Radique, but in fact he has other plans for Radique's particular skill set. Meanwhile, both the Bando Gora and Jabba the Hutt attack the prison.