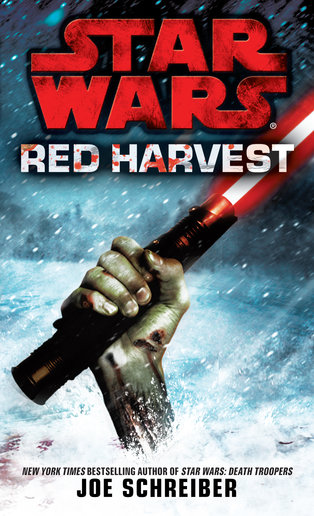 And you thought that zombie Imperials were bad.
Advertisement:

Red Harvest is a Star Wars Legends horror novel from 2010, written by Joe Schreiber. It is a prequel to his 2009 novel Death Troopers.

Taking place during the Old Republic Era, the Odacer-Faustin Sith Academy is about to experience a horror the likes of which they have never experienced before. The leader of the academy, Darth Scabrous, is conducting experiments that result in the creation of flesh-hungry zombies. To do that, he needs the Murakami orchid as one of the essential ingredients. Unfortunately, the orchid is Force-sensitive, and it requires its Jedi caretaker Hestizo Trace to stay within one meter of it to stay alive. This results in her being kidnapped, and it also results in her brother Rojo Trace dropping everything he was doing and coming to her rescue.

Essentially, this book is a Zombie Apocalypse in the Star Wars universe.