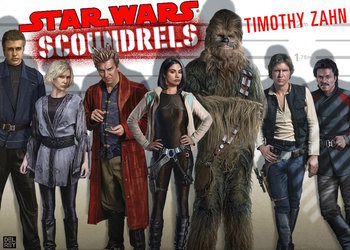 is a Star Wars Legends novel by Timothy Zahn. Set in the immediate aftermath of A New Hope, Scoundrels concerns Han Solo and Chewbacca's attempts to come up with another source of cash to pay off Jabba the Hutt, after their reward was stolen by pirates before they could make it back to Tatooine. Accordingly, when a stranger approaches him about a job with a possible take of 163 million credits, Han assembles a team of fellow rogues, thieves, and scoundrels to try to break into a crime lord's safe and get away with the loot.

Published in 2013, Scoundrels was one of the last Legends novels released before the Continuity Reboot of 2014, and as such is less well-known than Zahn's earlier Star Wars work. It's also of a much smaller scale than, say, The Thrawn Trilogy, taking place almost entirely on one planet, with the Galactic Civil War a peripheral concern. But it still has all of the convoluted interlocking plot threads and twists that Zahn is known for.

A prequel short story starring Lando, Bink, Tavia, and Zerba, "Winner Lose All," was released ahead of Scoundrels as an e-book, and included in the Scoundrels paperback edition.