Literature / Choices of One 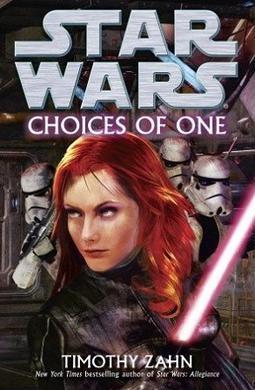 "The choices of one shape the futures of all."
— Jedi saying
Advertisement:

is a Star Wars Legends novel by Timothy Zahn. It's set eight months after A New Hope, and is a direct sequel to Allegiance.

Two months after the events of the previous book, Imperial Governor Ferrouz of Candoras sector contacts the Rebellion and offers them a permanent base in his capitol, the Poln system, if they'll help him deal with the alien warlord Nuso Esva, since his calls for help to the Empire have fallen on deaf ears.

Han Solo is tasked with bringing the Rebel envoy, a former Alderaanian governor named Axlon, to Poln Major, as a test of his ability to handle the responsibilities that would allow him to become an officer of the Rebel Alliance.

Luke Skywalker is discreetly tasked with escorting Solo and Axlon to Poln Major, as a potential backup in case of unwelcome surprises.

Mara Jade is given the mission of dealing with Governor Ferrouz's perceived act of treason and hires the former stormtroopers of the Hand of Judgment to help her in her task.

Meanwhile, in an apparently unrelated storyline, Commander Pellaeon, third bridge officer, serves aboard the Chimaera when the Star Destroyer is given the mission of escorting the mysterious Lord Odo on various missions.

As usual in a Zahn novel, the story first follows the characters in seemingly unconnected storylines, before bringing them all together in a situation that becomes more and more complicated as the story goes.

Choices of One provides examples of the following tropes: