Series / The Legend of Dick and Dom 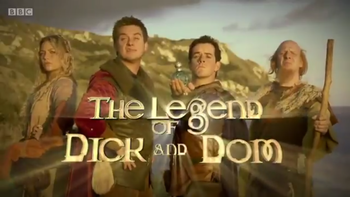 The Legend of Dick and Dom is a BBC children's fantasy sitcom, three seasons broadcast 2008-11. Stars Dick & Dom as bumbling royal brothers who must collect ingredients for a magic potion to cure a plague that has struck their homeland, Fyredor, aided by Inept Mage Mannitol and thieving servant Lutin.

The group wander all over the Fantasy World Map of Bottom World — sometimes literally, as the Lemony Narrator, Terry Jones, explains that they couldn't afford to film the incredibly exciting action that's going on, so they show a dotted line on a map dashing away from pictures of dragons instead. Each episode they have to defeat a Monster of the Week, or meet some wacky countryfolk who hinder them in finding the next revolting or impossible ingredient. In the third season, the plot switches to their attempts to get home before the newly revealed Big Bad can stop them.

This was Dick & Dom's first major CBBC project after Dick & Dom in da Bungalow, and there are plenty of Shout Outs to Bungalow games and jokes — DI Harry Batt turns up as a Sheriff, for example.

Fairly Troperiffic — see long list below — although many of the tropes are applicable to antagonists or settings from individual episodes (and are therefore slight spoilers).

The Legend of Dick and Dom provides examples of the following tropes: