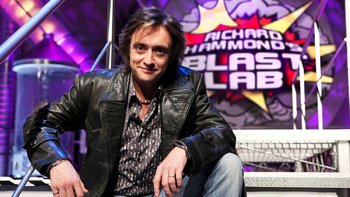 "Some of my experiments are a little... unreliable."
Advertisement:

Richard Hammond's Blast Lab is a Science Show aimed at children which attempts to teach various scientific theories by conducting dangerous experiments and blowing stuff up.

Every week a large haul of science-related prizes are set aside for two competing teams who have to conduct experiments and answer science questions with help from the Studio Audience. The winning team get to take their prizes home. The losing team don't. (You can probably guess what happens to THEIR prizes.)

In the opening credits of Blast Lab, we learn that within the grounds of Hammond's home lies an old water mill that conceals the entrance to his secret Blast Lab where he does weird experiments, grows strange new lifeforms in a tank of toxic waste and creates bizarre machines all in the name of science!

He is assisted by his Ninja Nan, who guards the lab, and a science teacher from his schooldays whom he has brought from the past to help with his experiments, but who is currently stuck in the body of a ten-year-old after the Time Machine malfunctioned. Also assisting is Oliver (or should we say OLIV3R?), an Opel Kadett who started out as a minor character on Hammond's other show Top Gear. There are also an apparently infinite number of nameless, mute, expendable henchpeople known as The Lab Rats.

Speculation whether this show was originally supposed to be an episode of MTV's Cribs is best confined to Wild Mass Guessing.