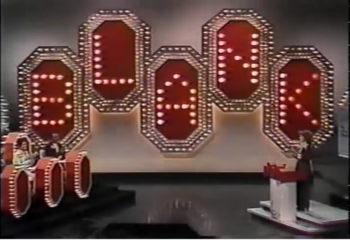 Game Show created by William T. Naud and Rich Jeffries note (not to be confused with the announcer for early episodes of Super Password and the 1987 version of Blockbusters) in 1974, which was hosted by Art James on NBC. The Jack Barry production (his first for the network since the quiz show scandals) involved six contestants, one of whom was the Checkwriter, competing over the week to fill checks ranging from $1 to $9,876. The Checkwriter hit a plunger to stop the five giant displays at center stage and determine which of the show's 40 number combinations (all numbers 1-9) would be in use.

The other five contestants, seated behind a group of podiums, was asked a question by James which required connecting two words ("Give me the one word that connects a citrus fruit and a bad car", with the answer "lemon"; some questions required a two-word answer). The first to buzz-in and give the correct answer then tried to "use his/her ESP" and guess which number the Checkwriter had picked; a correct prediction meant the challenger became the new Checkwriter (using the plunger to select a new group of five numbers), while an incorrect guess put that number into the rightmost slot of the check. Play continued until a Checkwriter wrote a three-digit check, at which point s/he played a game with a member of the audience.

A correct prediction during the audience game ended it right there and allowed the Checkwriter to go for their thousands digit (picked by way of another question and ESP bit with the other players). If a Checkwriter completed his/her check, or lost the audience game, Art asked a question to the other five players, with the player responding correctly switching places with the former Checkwriter. All players kept whatever money they earned from writing checks, and on each Friday the player who wrote the largest check also won a new car.

If this is confusing, we don't blame you. It was also pretty dull.

Blank Check wasn't a success — replacing Dennis James' Name That Tune on January 6, 1975 in a scheduling shuffle with the popular Celebrity Sweepstakes, it not only had to run just 25 minutes to accommodate the network's five-minute newscast at 12:55 PM, but went up against Search for Tomorrow on CBS and the soon-to-be-canned-but-still-kicking-your-ass Split Second (1972) on ABC. Not even Art or the show's staff considered it more than a dumb-luck guessing game, calling it "Blank Mind".

Check was canned on July 4 and remained mostly forgotten until 1986, when Barry's business partner Dan Enright (apparently having gained the Check rights after Barry died in 1984) sued The Price Is Right over one of their pricing games — Blank Check, which debuted in 1981. Rather than fight it, Price removed the game for seven weeks before bringing it back under its current name of Check Game.