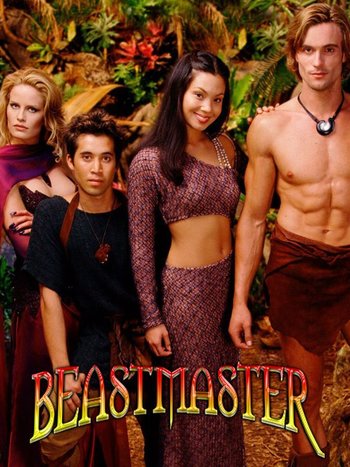 "In an age when nature and magic rule the world... there is an extraordinary legend: the story of a warrior who communicates with animals."
— Beastmaster intro
Advertisement:

Emerging on the heels of the enormous popularity of Hercules and Xena, Beastmaster was a recycled TV series of the film of the same name and shared the general Walking the Earth in The Time of Myths sort of theme. The series lasted from October, 1999 to May, 2002. A total of 66 episodes in three seasons.

Starring Daniel Goddard as Dar, Jackson Raine as Tao, Steven Grives as King Zad, Monika Schnarre as the Sorceress, Grahame Bond as the Ancient One, and Marjean Holden as Arina.