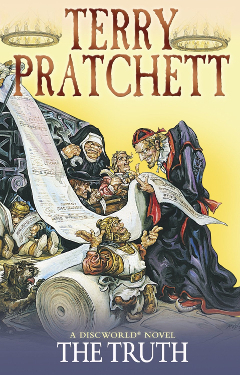 ...Shall Make Ye Fret.
A lie can run around the world before the truth has got its boots on.
Advertisement:

The 25th Discworld novel and the first standalone since Small Gods.

Building on the the themes of change started in the previous book The Fifth Elephant, another of the Disc's previous Medieval Stasis principles is broken: no movable type. There's a rumour that dwarfs can turn lead into gold - and they can, by making the lead into typeface and undercutting the engravers. William de Worde, a young scribe who makes his living writing for the illiterate and sending letters of news to distant nobles, encounters the dwarfs and ends up writing the first newspaper, The Ankh-Morpork Times for them, with the help of engraver's granddaughter Sacharissa Cripslock and the photography-obsessed vampire Otto Chriek.

Meanwhile, a plot against the Patrician takes shape. The shadowy organization from Feet of Clay returns, now named as the Committee to Unelect the Patrician. They've obtained a lookalike for Lord Vetinari from Pseudopolis, and hired Mr Pin and Mr Tulip, the "New Firm" of hired thugs, to help them achieve their devious ends. It's up to William de Worde, with the help of Gaspode the Wonder Dog, to get to the bottom of their nefarious plot.

Preceded by The Fifth Elephant, followed by Thief of Time.

The Tropes Shall Make Ye Fret