Literature / The Girl from the Miracles District 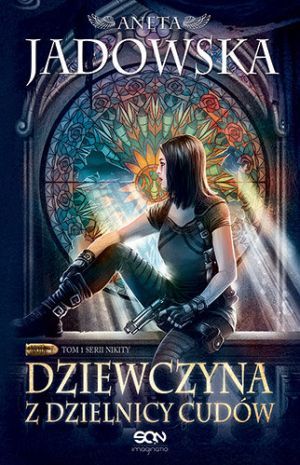 Ever since the human World War Two poisoned the Ley Lines of the alternative world of magicals, the alt-city of Wars, once a thriving metropolis, has been a twisted and bizzare place. Entire districts are abandoned because of magic cursing through them; cracks leading to the human world are appearing in strangest of places; storms bring surges of dark energies that can turn you into a mindless monster in your sleep if you don't protect yourself; there's an entire zone permanently stuck in 1936 because of a miscast spell; and then, across the river, past the cursed bridge, there's Sawa, Wars' sister city, which makes its sibling look like a holiday resort.

It is in Wars that Nikita lives. An assassin with secrets aplenty, nicknamed "the Mantis" by her coworkers, she's employed by the Order of Shadows, a group of Private Military Contractors run by a woman called Irena, secretly Nikita's mother. Lately, Nikita hasn't been having a good time. For starters, Wars is going through a season of heavy storms, and monsters are roaming the streets. As if that wasn't problematic enough, in yet another attempt by Irena to keep an eye on her, Nikita is assigned a partner, a man called Robin, whose official backstory couldn't be more obviously false and who doesn't even remember what his real backstory is. As Nikita's trying to figure out a way to get rid of him, another news comes — her friend, a burlesque singer from the time-stuck Miracles District, has gone missing, likely taken out of the town-within-town. The peculiar nature of the place's magic means that if Zelda doesn't return into its borders within a few days, she will go into coma and die - and no-one has any idea where she went.

And just to add insult to the injury, someone mails a peculiar gift to Nikita's supposed safe hiding spot — thirty roses, each accompanied by a dead preying mantis pinned to its stalk.

The Girl from the Miracles District provides examples of: