Recap / Asterix and the Missing Scroll 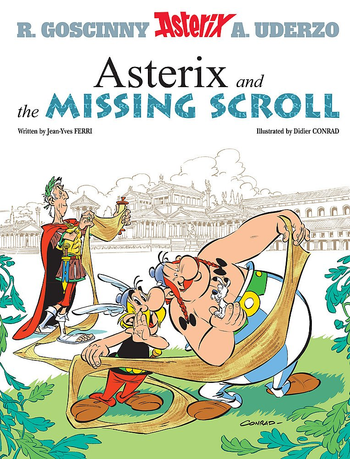 The comic adds a fictitious Chapter 24 (XXIV) titled "Defeats at the Hands of the Indomitable Gauls of Armorica" to Julius Caesar's Commentaries on the Gallic War. Caesar's publisher, Libellus Blockbustus, deletes this chapter, fearing it would besmirch the Roman leader's curriculum vitae. A mute Numidian scribe, Bigdhata, steals a copy of the chapter and gives it to the journalist Confoundtheirpolitix, who in turn passes it on to the village of indomitable Gauls.

Chief Vitalstatistix is unfazed by the lie that all Gaul has been conquered by the Romans, but his wife Impedimenta urges him to campaign for the truth. Since the Gauls have, unlike the Greeks and Romans, no skills in reading and writing, the druid Getafix (accompanied by Asterix, Obelix and Dogmatix) travels to the forest of the Carnutes to meet his former teacher, Archaeopterix, who will then pass on the truth by word of mouth to future generations. The true story eventually reaches René Goscinny and Albert Uderzo in a French cafe, who publish the censored tales in comic books as the Asterix adventures.

Asterix and the Missing Scroll provides examples of: