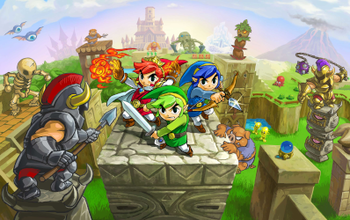 It's dangerous to go alone... so don't!
The Legend of Zelda: Tri Force Heroes is the 18th installment in The Legend of Zelda series, released on the Nintendo 3DS in North America and Europe on October 23rd, 2015. It is the third Zelda game to utilize multiplayer for the main game, after Four Swords and Four Sword Adventures, and notable for being the series first online multiplayer outing. According to Word of God it is a direct sequel to A Link Between Worlds, with that game's Link being one of the three Links here.
Advertisement:

The story takes place in the fashion-forward kingdom of Hytopia, whose princess (who is not Zelda for once, but the princess Styla) is renowned for her beauty and style. But one day, she is cursed to be — [shudder] — unfashionable; stuck in a full-body leotard that she can't take off. The king calls out for a hero, and naturally, Link is ready to answer the Call to Adventure... however, so are two other Links. With multiple people claiming to be The Hero this time around, they have to work to fulfill the king's prophecy of three heroes that come together to form a totem.

Naturally, the gameplay is heavily based on The Legend of Zelda: Four Swords, only minus one Link. The game supports local and online multiplayer, the latter being a first for the series. There is a Hub Town as a staging ground for adventures, while dungeon structure is similar to the dungeons found in the original Four Swords, only with a few twists thrown in from The Legend of Zelda: A Link Between Worlds, which it shares the same general graphical style with. Like the Four Swords series the game omits an overworld in favor of just picking out which dungeon players wish to tackle from a map screen, but a hub town that acts as the lobby is present. An update on December 2nd, 2015 added a new Bonus Dungeon and two new outfits.