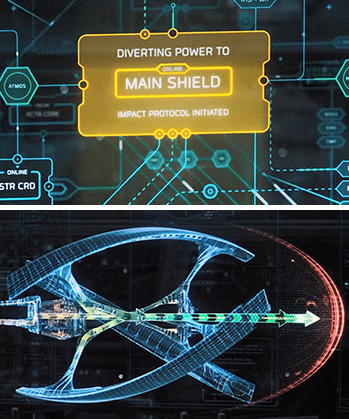 According to Tim Taylor Technology, all you need to do to enhance a system is pump more power into it. But where do you get that power?

Diverting Power is what happens when Tim Taylor Technology runs into a limited pool of power. If the extra power to pump into something is not readily available, that power must be reclaimed from somewhere else, usually by shutting down or reducing power to one system to power up another.

Played well, this can add extra tension and interest. Buffing up one aspect of something can expose a Logical Weakness in another aspect. An observant hero might use this to dodge the extra danger of one foe powering up an aspect of himself by exploiting the aspect he left vulnerable. Or a Wave-Motion Gun might be enough to end a battle in one shot, but doing so requires that the user power down all other systems and leave himself vulnerable, thus justifying why he does not use it all the time.

Note that most of the uses of this involve technology using presumably electrical charge or Minovsky Physics. However, this trope can also apply to something using steam pressure, Functional Magic, or other similar concepts, depending on how they are handled in the context of a particular setting.