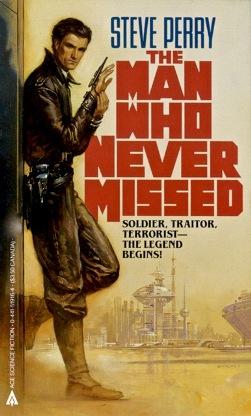 Because "The Man Who Only Missed a Few Times" just doesn't have the same ring to it.
"I'm the leader of the Shamba Freedom Forces. In fact, I'm the entire army."
— Emile Antoon Khadaji, The Man Who Never Missed
Advertisement:

The Matador Series is a sequence of Science Fiction novels by Steve Perry, generally following the life of former soldier Emile Khadaji, as he initiates a revolution against the corrupt Galactic Confederation ('The Confed').