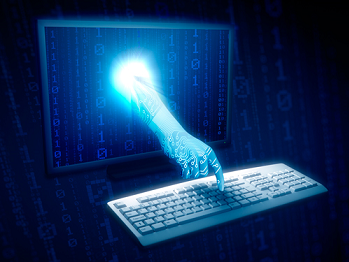 The only thing more dangerous than The Cracker or Mad Scientist in general is a Virtual Ghost Cracker.

Ask just about anyone what they fear about a future where you can jack into the Internet directly through your brain (and Everything Is Online), and the threat of a Cracker or Playful Hacker will usually be in the top 3 (along with computer viruses and the potential feedback if the mechanical part of the interlink breaks down). After all, we're all told that the human mind is the most powerful computer on Earth, and if that computer were to interface directly with cyberspace, the potential for disaster is limitless. So you can imagine what kind of havoc a computer-savvy criminal or complete psychopath would cause if they were to be digitized and let loose online.

Sometimes, they're not even full-fledged Virtual Ghosts; they may have physical bodies to which they can return. It's just that for them, virtual life and omnipotence is much preferable to the alternative. If they do have a physical body to which he can return, you can bet that, if they wish to have a physical avatar, they'll have multiple backup bodies just in case their original goes kaput.

See also Brain Uploading and A.I. Is a Crapshoot. This is also not dependent on Body Uploading-processes that are called "digitization".