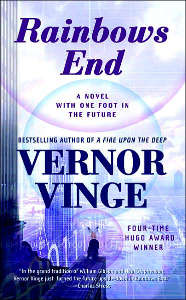 Rainbows End is a 2006 near-future Science Fiction novel by Vernor Vinge. The absence of an apostrophe in the title is deliberate.

The novel follows two different storylines, which gradually begin to converge. The first story is of Grünberk Braun, a member of the European Union Intelligence Board who discovers a Mind Virus that seems to have come from a lab in San Diego, California, and of his colleague, Alfred Vaz of India's External Intelligence Agency, an expert Braun quickly turns to. Unfortunately, Vaz is the man secretly behind the virus, which he believes is the only way to end terrorism forever. The second story is of Robert Gu, a world-famous poet, who has recently been cured of his Alzheimer's and given rejuvenation treatments, and is now living with his son in San Diego and learning to cope with the changes in the world in the years since he started becoming senile.

The team formed by Braun and Vaz decide that a direct approach to the American government would be too risky—the Americans might be behind the virus. So, posing as South American drug lords, they approach a secretive hacker known as The Rabbit to help them find a way into the San Diego labs. Meanwhile, Robert Gu has discovered that the library at the University of San Diego is about to be digitized using a destructive process that shreds the physical books. Dismayed, he joins a group seeking to stop this action, known as the Librareome Project. As it turns out, The Rabbit has his own plans for the anti-Librareome group.

The book spends a lot of time exploring the implications of "wearables"—powerful, light-weight networked computers that use contact lenses or glasses for display, and subtle gestures for input; a logical extension of today's smartphone technology. Wearables are as common in the world of Rainbows End as cell-phones are today, especially among the young.