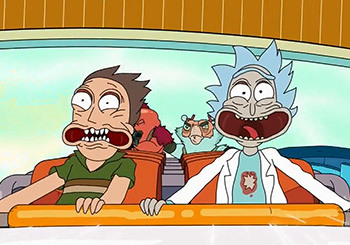 "I can't hear you! My cheeks are covering my ears!"
— Candace Flynn, Phineas and Ferb
Advertisement:

A character who is blasted in the face by a strong current of air — whether because of wind resistance from moving at great velocity (i.e. dog sticking its head out a car window, or human strapped into a very fast rollercoaster), facing a powerful fan, or getting caught in a strong wind — gets their lips and cheeks stretched backwards and flapping in the air with a wet sound, with the gums grotesquely exposed and droplets of saliva sprinkling. This is almost always a source of slapstick comedy and it's exaggerated in animation, in which case the cheeks can stretch like rubber to impossible proportions.

Often happen to victims of a Centrifugal Farce. Compare Rubber Face for a different kind of stretchy facial features.