It is highly recommended that you watch at least the first two episodes of Deca-Dence before continuing to read on. Major spoilers are ahead. 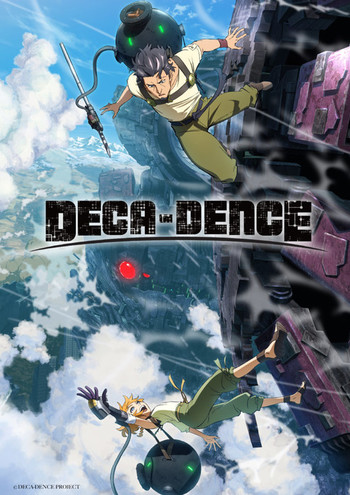 Hundreds of years have passed since humanity was driven to the brink of extinction by the sudden emergence of unknown life forms known as Gadoll. The remainder of population is now limited to the Eurasian continent, where they dwell in a 3,000 meter high mobile fortress called Deca-Dence, which was built to protect themselves from the Gadoll threat.

On the Deca-Dence lives Natsume, a Tanker (i.e., normal human) girl who, after a near-death incident as a child that cost her a limb, dreams of joining The Power, the group of warriors who fight the Gadoll daily and mostly consist of the genetically-enhanced Gears. Unfortunately for her, she gets stuck on armor repair duty, forced to scrub the outside of the fortress clean of any goo that results from the aftermath of fights. One day, when the Deca-Dence gets attacked while she's on duty, another scrape with death has her learn that her surly supervisor Kaburagi is actually a former fighter. Cue some badgering, and he soon relents to teaching her the skills needed to defend her home and join the ranks of The Power herself. At least, that's how things are from her perspective.

In reality, in the latter part of the 25th century, air pollution had reached lethal levels and society broke down. In the midst of all this, large Mega Corps took over and developed cyborg bodies that quickly came to outnumber humans. Eventually, one of these corporations acquired the rights to the remaining unmodified humans, putting a gigantic dome over the continent of Eurasia and making it a wildlife preserve for humans with its own self-governing system... and an entertainment facility for cyborgs. With humans none the wiser, they had become the NPCs in a bizarre mix of LARPing and VR MMORPG, with Gadoll being genetically-manufactured monsters created to keep things interesting and Gears actually being the human avatars of cyborgs who now reside off-planet. Kaburagi is one such cyborg, a retired top player who was days away from finishing starving himself to death before discovering that Natsume is actually a "bug" in the system; in this case an Unperson whose embedded tracking chip broke down shortly after the Gadoll attack that took her father and arm. But rather than kill her as per company policy, her strange existence renews Kaburagi's interest in the game and he decides it would be far more interesting to take her on as an apprentice. What follows throws the intended "storyline" of the game completely off the rails, for better or for worse.

Produced by Studio NUT, the series is directed by Yuzuru Tachikawa (Death Parade, Mob Psycho 100) and aired during the Summer 2020 anime season. The show is licensed in North America by Funimation.