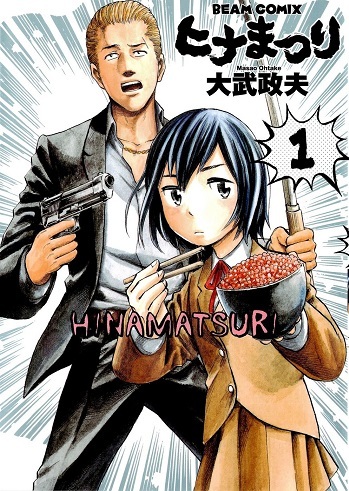 Yoshifumi Nitta is an up-and-coming yakuza who one day has a girl in a metal cocoon drop into his apartment — specifically, onto his head — from out of nowhere.

The girl's name is Hina, and she's quite happy just to eat, sleep, and play console games. She also happens to be a psychokinetic who needs to regularly use her powers, otherwise they'll go wild.

Nitta is not happy about any of this, but Hina refuses to leave, so he reluctantly finds himself in the role of adoptive father to a gluttonous, lazy, none-too-bright psychokinetic freeloader.

Soon, more weirdos show up, and Nitta is forced to become the worst thing imaginable... a responsible adult.

Hinamatsuri is a half screwball comedy, half coming of age story written by Masao Ohtake. The series was originally serialized in Enterbrain's magazine Fellows! before it got rebranded into Harta, and published into 19 volumes and 100 chapters. The manga ran from 2010 to 2019.

An anime adaptation produced by Studio feel. started in April 2018, running for 12 episodes. It is available for worldwide streaming on Crunchyroll here

. Funimation's Simuldub of the anime series premiered on April 26th, 2018. Watch it here