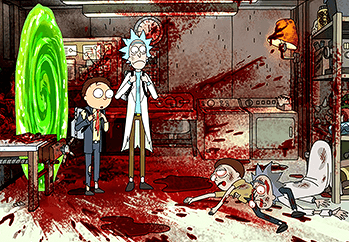 "What about the reality where Hitler cured cancer, Morty? The answer is don't think about it."
Timeline 23 Josh: Look, Julia, in my timeline, you were the best student Brakebills ever had, at least until you were...horribly murdered.
Julia: Oh.
— The Magicians (2016), "Twenty-Three"
Advertisement:

This is when a character travels to an Alternate Universe and discovers their counterpart there is dead. Usually, it can be the result of Time Travel or perhaps a malicious entity at work. Whatever the case, when the characters discovers this fate, it may lead to shock or terror.

Compare with Discovering Your Own Dead Body, or Killing Your Alternate Self for when someone cuts out the middle-man.