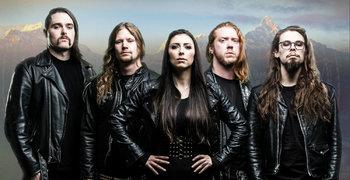 Abandon this sun, what’s done is done, and time will go on and on
Advertisement:

Unleash the Archers is a Canadian heavy metal band from Victoria, BC. They are currently signed with Napalm Records. The band is notable for its Creator Couple Brittney Slayes and Drummer Scott Buchanan, their rotating bandmates, as well as its unique take on Power Metal using some death metal elements with growls.

They primarily toured Canada up and down throughout the early 2010s, and finally broke into prominence primarily on the heels of their Time Stands Still album, and followed it up with the Concept Album Apex, about a terrible Matriarch who summons an immortal to do her bidding.