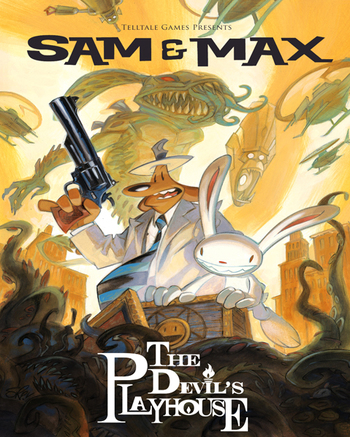 Psychic Powers, Killer Space Monkeys, Eldritch Abominations. Just a normal day for the Freelance Police.
"Over the next five chapters, you will witness things that baffle you, horrify you, even disgust you. But you must not look away! Pay close attention to everything you see and hear! Because when our story reaches its bowel tingling climax, only you, my friends, will possess the ability to save the entire universe".
—The Narrator
Advertisement:

Sam & Max: The Devil's Playhouse is the third season of Telltale Games' Sam & Max adventure game series, starting on April 2, 2010, and concluding on August 30, 2010. In here, the Freelance Police are embroiled in a plot to collect "Toys of Power" that grant those with the ability to wield them (including Max, conveniently enough) awesome psychic powers. Said plot involves evil gorillas from space, eldritch horrors and mole-men.

This season and the previous two have a Best Episode Crowner