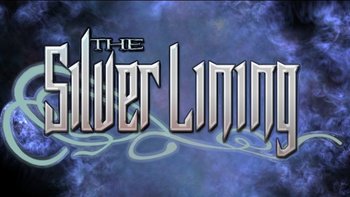 A Fan Sequel to the King's Quest series currently being produced by Phoenix Online Studios.

Formerly known as King's Quest IX: Every Cloak Has A Silver Lining, The Silver Lining brings back the characters from the old series and attempts to bring some closure to the story of the first family of Daventry. Currently, four of the five episodes have been released.
Advertisement:

The game is probably more well known for the story behind its production than the actual gameplay. After announcing their intentions and gain a lot of hype, they received a cease and desist order from Vivendi Universal (who owned the rights to King's Quest). After a strong effort from the community, they were able to continue producing the game, provided that they remove the words "King's Quest" from the name. They continued their work only to receive another cease and desist right before they were ready to release the game, this time from Activision (who had gained the rights to Sierra games from Vivendi). After much discussion, they were able to get that one overturned as well.

The story of the game is as follows. During the wedding of Rosella and Edgar, a stranger in a black cloak crashes the party and casts a spell which puts both Rosella and Alexander in a coma. Graham decides that he must don his adventurer's cap one more time to undo the curse. During this, he uncovers a much deeper plot related to the Black Cloak Society.