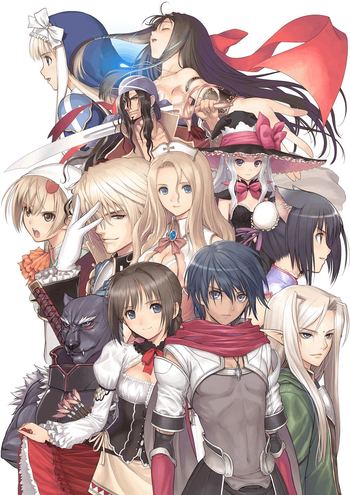 Rick Elwood is a swordsman who currently makes a living as a mere baker in the peaceful island-kingdom of Wyndaria with his three beautiful coworkers, Neris Filiam, Amil Manaflare and Airy Ardet, occasionally going on errands delivering bread to their neighbors and even to an elven forest inhabited by Alvin, a handsome yet prideful elf, and his energetic sister Rana.

These idyllic days, however, would come to an abrupt end when a mysterious black-haired girl dressed in white washed ashore on a beach near where Rick's home ship is moored. The girl — Kaguya as she came to be known — has shown a near-total lack of memories as well as emotions upon waking up. And on top of it all, pirates start to swarm the otherwise serene Wyndaria, seeking a pendant Kaguya was wearing when Rick found her.

Thus Rick, his coworkers, and a growing crew of allies, embark on a quest to restore peace to Wyndaria as well as Kaguya's memories and emotions, all the while discovering many secrets concerning this beautiful living Pandora's Box.

Shining Hearts is a Japanese RPG (and still Japan-only) released on 16 December 2010 for the PlayStation Portable, featuring artwork by Tony Taka. In a departure from most games in the Shining Series, Hearts instead features a Turn-Based Combat system, as well as the "Mind Over Emotion System" (M.O.E.S.), in which Rick has to choose an appropriate response within a time-limit. His reactions can influence hearts generated by characters (red for happiness, yellow for anger, green for kindness, and blue for sadness), which can be used to influence changes within Wyndaria and also expended for making bread.

Now has an anime, Shining Hearts: Shiawase no Pan, airing as part of the Spring 2012 Anime block.