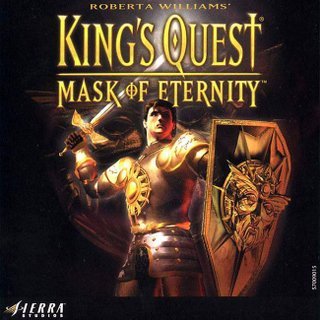 Released in 1998, King's Quest: Mask of Eternity (also known as King's Quest VIII: Mask of Eternity, or simply KQ8) is the eighth and, until 2015, last official game in the King's Quest series. It was a notable departure from the previous Adventure Game format, and while it included about the same number of puzzles (actually more than most of them, except for possibly VII) as the previous two games (or at least starting with VI and VII)

, the puzzles were overshadowed by more hack-and-slash Diablo-like RPG elements (which are included in the total 'puzzle' score for the game). It was also the franchise's first attempt at a 3D game.

While it was moderately well-received in its time, the crash of the adventure game industry killed the series (along with several other Sierra IPs), there was an attempt to make a ninth game: King’s Quest: Twins of Change (in the early 2000s as a Zelda-like action game, but it didn't go very far). Supposedly, Roberta Williams, creator and chief designer of the King's Quest series, was the one who had come up with the idea to add action elements (with input by Mark Seibert), largely due to the fact that there were long stretches of areas with nothing to do between puzzles, empty, barren, and uninhabited (or turned to stone). So adding monsters added something to see, and something to do in those areas.

This is the first game where you play as someone other than a member of the Daventry royal family, with the exception that Graham was technically not a member of the Royal family through most of the first game except the ending (but also not counting the 'wanderer' in Wizard and the Princess, or the Captain in King's Questions, or the plot twist of Gwydion turning out to be Alexander).

You are Connor, a young tanner and lesser rustic knight (much like Graham in the original game), who has a date with destiny. A piece of a mystical artifact called the Mask of Eternity falls at Connor's feet; at the same time, the entire kingdom of Daventry is turned to stone. To save the kingdom, Connor must find all the pieces of the broken Mask and restore them in the Realm of Sun, all while slicing his way through enemies.