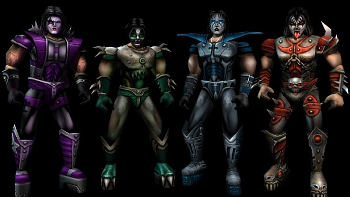 The Starbearer, The Beast King, The Celestial and The Demon, ready to make John Romero their bitch. note The pedigree of the game's developers was a good reason to make that joke.
Advertisement:

Hot on the heels off the resurgence of popularity KISS have been enjoying in the mid-to-late nineties, their Psycho Circus tour theme would become the basis for the Kiss Psycho Circus comic book published by Image Comics. And then Third Law Interactive - a studio made out mostly of former Ion Storm employees that walked out of the company in middle of Daikatana's development - would make a First-Person Shooter that follows up that comic, released for the PC in 2000, with a later Sega Dreamcast port.

The game iself follows Wicked Jester - a KISS tribute bandnote Pablo Ramirez as The Starbearer, Patrick Scott as The Beast King, Andy Chang as The Celesital, and Gabriel Gordo as The Demon - who expected to have a gig at a deserted club, only to be summoned by Madame Raven, alerting them to the existence of The Nightmare Child. Before getting to confront the ultimate evil, the player would have to go through each of the four elemental realms - in any order, although there's a recommended order: Water, Earth, Air and then Fire - of the Psycho Circus as each band member (each coming with their own melee and ultimate weapons they'd get, in addition to four weapons used by all of the members), blasting off myriad of bizarre circus-themed creatures and collecting pieces of armor that bring them closer to becoming avatars for The Elder.

Respect your tropes... or kiss your ass goodbye: