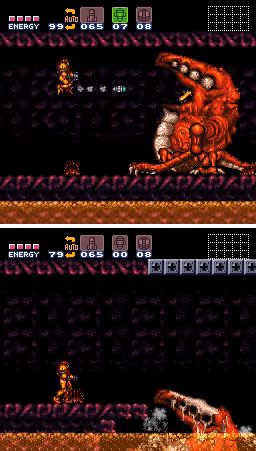 A Sub-Trope of Puzzle Boss, and often a Bullfight Boss, the Ring-Out Boss is a type of Boss Battle where the boss itself cannot be just defeated via damage, but has to be knocked or thrown back into a dangerous substance or obstacle to cause damage. Very much the Boss Battle type used when the hero fights the Implacable Man or a character with Nigh-Invulnerability.
Advertisement:

There are two types of this:

A Sub-Trope of Convenient Weakness Placement, and very much a subtrope of Ring Out, as that is the aim in one of these battles—albeit often with a foe who can come back a few times before being killed. Related to Boss Arena Idiocy, as it's only due to the dangerous and (for the enemy) stupid design of their battle arena that they can even be killed at all. Contrast Boss Arena Urgency, in which the boss is trying to ring you out.

May be a Breather Boss due to many, many cases having limited physical damage abilities against the player character, and relying on trying to send the player into the same obstacle they're weak against.

Occasionally a Bullfight Boss who has to be lured to charge into the dangerous substance/location.

Plot-wise, this trope can pave some ways for a Disney Villain Death.

Mario has to help Bowser push King Olly off the ledge.

Mario has to help Bowser push King Olly off the ledge.