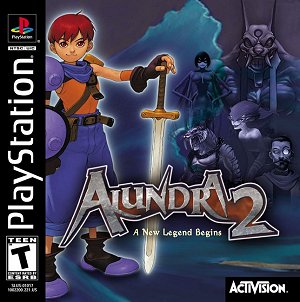 Alundra 2 is an Action-Adventure game for the PlayStation and the sequel to Alundra, released in 2000. Set in the kingdom of Varuna, the story focuses on Flint, a young man famed for his pirate hunting abilities. The backstory reveals that the king has recently been forced to abdicate in secret; the evil Baron Diaz has taken over and replaced the King with a literal puppet.

As the game opens, we see Flint sneaking aboard a huge airship. On board, he encounters a crew of strange mechanical men with wind up keys in their backs, along with a trio of pirates, who, while ostensibly in league with the baron, are more than a little uneasy about it. Flint's presence results in a scuffle that wrecks the airship and sends it down; Flint bails at the last second, plummeting into the sea and having a very strange encounter with a sperm whale before washing ashore near the tiny village of Paco.

In Paco, Flint is introduced to the Princess Alexia, who has been seeking him in the hopes that the "famed pirate hunter" can help her defeat the baron (though she was Expecting Someone Taller). Hearing rumors from the villagers of a great bird that passed over recently, they set out for Mt. Sparrowhawk. There they find the crashed remains of the airship, along with definitive proof that the baron is working with the pirates. Unfortunately, they are interrupted by the arrival of former court wizard Mephisto, and a platoon of mechanical men. Mephisto is revealed to have power over bizarre magic wind up keys that can turn normal creatures and people into cyborg monstrosities. After narrowly escaping him, Flint and Alexia begin a journey to figure out how all these pieces fit together, and hopefully save the kingdom before something truly terrible happens...