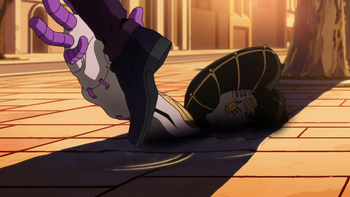 Figure in black which points at me...
Advertisement:

Some characters like hiding in shadows; these take that a step further and use them as portals.

Descriptions of this travel often involve the character entering a "shadow world" where they are able to travel further and faster than in the real world. A walker's ability to perceive and influence the real world from this shadow world (and vice versa) varies.

For obvious reasons, this is a technique usually employed by evil or at least morally ambiguous characters.

Occasionally characters are able to create their own shadows to do this, rather than using existing ones.

Nacht Faust uses shadow magic, letting him move himself and whatever he touches from one shadow to another.

Nacht Faust uses shadow magic, letting him move himself and whatever he touches from one shadow to another.