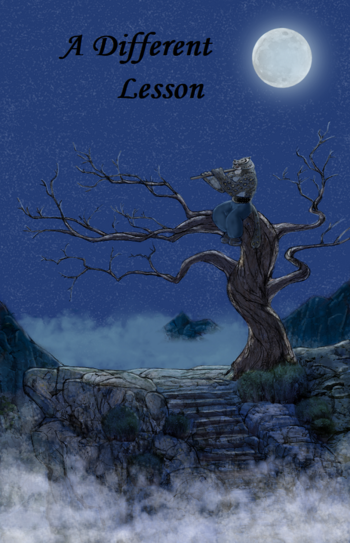 Suppose this for a moment: not only did the Wuxi Finger Hold neither kill Tai Lung nor send him to the Spirit Realm, it purged him of his insanity and brought his rage down to manageable levels. Suppose Shifu was then determined to restore his son to his former heroic self, coming to him afterward and offering him a deal: submit to him, learn to control his anger and atone for his sins, and he will once again have a place at the Jade Palace. Tai Lung refuses initially, but then receives a little encouragement from Po, who believes in the snow leopard and offers him forgiveness and friendship to get back on the right path. And once he begins viewing his actions as a My God, What Have I Done? moment, Tai Lung resolves to begin the long path towards redemption from the Valley of Peace, thereby finding a meaning and purpose for his life.

But then suppose, meanwhile, something else has been awakened in Chorh-Gom. Something far more terrifyingly evil than the snow leopard could ever hope to be, previously sealed away by Master Oogway himself, now freed by his death; something poised to cast its terrible shadow over the land, seeking to rule and control the lives of everyone in China through possessing and manipulating the chi of Tai Lung himself, corrupting him once more into a monster—and something that can only be destroyed by all of them, even Tai Lung, putting aside their differences and banding together to stop it.

Welcome to A Different Lesson

Archive of Our Own.)

A novel-length Doorstopper Fix Fic that serves as a continuation as well as an Alternate Universe where things turned out a little differently than they did in the film, and one which at times does border on a little too much Purple Prose and Sesquipedalian Loquaciousness as well as being much Darker and Edgier than the source material, the story nevertheless addresses many pertinent points raised but never resolved by Kung Fu Panda, or even ignored altogether, all in a very thoughtful, complex, and human way.

The story is notable for not pulling any punches when it comes to the daunting prospect of actually redeeming Tai Lung. Even he doesn't believe it possible at first. But there are no accidents, and nothing is impossible if you only believe in yourself.

In the wake of the fic's completion, the author has finished two other stories that fill in certain details and expand the universe, located at Different Tales, Different Lessons.

WARNING: Beware of Spoilers ahead!