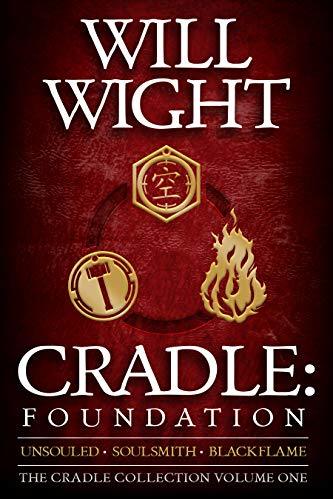 "My organization has a name for this world, Wei Shi Lindon. We call it 'Cradle.' It is where we keep the infants."
— Suriel, Phoenix of the Abidan
Advertisement:

Wei Shi Lindon lives in Sacred Valley, an isolated place where sacred artists train to master the magic of the world and themselves. Unfortunately, Lindon is an Unsouled, a cripple who will never be able to be as strong as any other sacred artist no matter how hard he tries. He is barely above an outcast, his every deed spit upon or ignored. At age fifteen, the average eight year old can easily defeat him in battle.

Everything changes at the Seven-Year Festival, when a rival clan summons their immortal Grand Patriarch from another world. As the Grand Patriarch is easily slaughtering his way through the most powerful sacred artists of the Valley, Lindon tries to help. He is killed as casually as one might brush off a speck of dirt. But then, time stops, a goddess descends from the sky, and throws the Grand Patriarch in prison. She congratulates Lindon on his courage, and reverses time to before the Grand Patriarch's interference, reviving the dead and removing their memories.

Lindon, however, is allowed to remember. He is allowed to remember that his home is destined to be destroyed in thirty years time—and he will be able to do nothing to stop it. To save Sacred Valley, he must travel to the outside world, where even the strongest sacred artists from the Valley would be considered little more than children. There, he can find the power to save his home.

A series of fantasy novels by Will Wight. The series currently consists of eleven books, the first three of which have been gathered into the "Foundation" collection, Books four through six into the "Path of Gold," and books seven through nine into the "Rise of Lords."