Film / Into the Wild 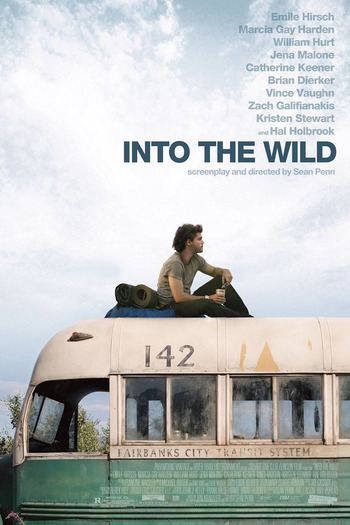 "Two years he walks the earth. No phone, no pool, no pets, no cigarettes. Ultimate freedom. An extremist. An aesthetic voyager whose home is the road. Escaped from Atlanta. Thou shalt not return, 'cause "the West is the best." And now after two rambling years comes the final and greatest adventure. The climactic battle to kill the false being within and victoriously conclude the spiritual pilgrimage. Ten days and nights of freight trains and hitchhiking bring him to the Great White North. No longer to be poisoned by civilization he flees, and walks alone upon the land to become lost in the wild."
Advertisement:

Into the Wild is a 2007 Biopic written and directed by Sean Penn, based on the 1996 nonfiction book of the same name by Jon Krakauer about the adventures of Christopher Johnson McCandless, portrayed by Emile Hirsch.

The book and movie chronicle the life of Chris as a young man resentful of society and his family, who decides after graduating college to spend a few years travelling around and living off the land in Alaska. The book is written from the perspective of Posthumous Narration and serves as a How We Got Here look at Chris's brief life and final days.

Because the story's premise — that the protagonist leaves society, tries living on his own and ends up dying — is invokedso well-known, there is no need to mark it as a spoiler.

Not to be confused with the first book of the Warrior Cats series. Compare with the film, Wild starring Reese Witherspoon, effectively the distaff version of this story, but with the woman approaching her soul journey with a bit more intelligence.

The book and film provides examples of: