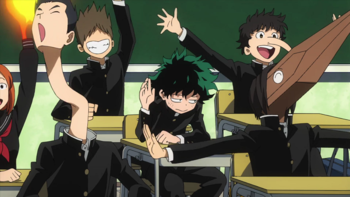 Not even green hair can save him from utter mediocrity.
Advertisement:

A Muggle Born of Mages is someone born to parents with Magic and Powers and privy to The Masquerade, but entirely mundane himself. However, as the world is full of Muggles, he can simply become one of them.

This is not the world of the Un-Sorcerer. Here there is no Masquerade, because Everyone is a Super... except him. Magic healing doesn't help, and neither does therapy. The kids at school tease him. He can't operate Magitek. He can't even claim to be a Badass Normal, because normal people have the Power! For practical intents and purposes, this lack is a Fictional Disability in a world with no way of accommodating it.

As bad as this sounds, though, there's often a silver lining: someday, it will turn out that his unique status is an asset to him. He may be immune to magical attacks, or to The Corruption. Maybe he really has a game-breakingly awesome power that takes a long time to manifest. Maybe there's an Ancient Artifact that only activates for someone with no magic. Or perhaps, lacking a crutch, the Un-Sorcerer develops a Charles Atlas Superpower in a world of Squishy Wizards. What's certain is that if they are the focus of the story, somehow the Un-Sorcerer will go far, and may even be The Chosen One.

An Un-Sorcerer can only survive by averting Hard Work Hardly Works. Essentially an in Inversion of the classic Super Hero trope. See also Muggles Do It Better. Sometimes used to derive An Aesop.