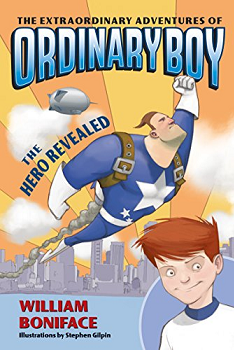 The story takes place in Superopolis, where everyone has a superpower with the exception of the main character and narrator, Ordinary Boy. He is a member of a team of superheroes (read: five fifth graders) called the Junior Leaguers who want to one day join the League of Ultimate Goodness and fight beside OB's hero and idol, the Amazing Indestructo.

The books are: The Hero Revealed, The Return of Meteor Boy?, and The Great Powers Outage.

The Extraordinary Adventures of Ordinary Boy provides examples of: