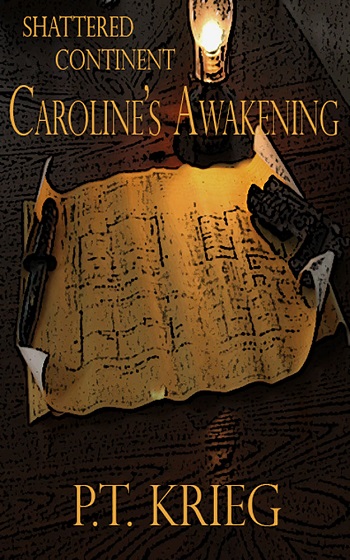 "Welcome to the multiverse, kid. Enjoy your headache."
Advertisement:

A Diesel Punk/Fantasy series established in 2014, Shattered Continent takes place on Neue Erde, a nexus point between dimensions and dumping ground of the multiverse. The main supercontinental land mass is shared between two nations, the magic-heavy New Empire in the West, and the highly militarized, tech-heavy Cardenas in the East. Unable to discover a way back off the planet after generations of attempts, they have settled into more pressing affairs, specifically the repulsion of the invasion of extra-dimensional entities that happens once every 20 to 30 years. The last time it happened, around 1995, the combined armies of Neue Erde resorted to using a thermonuclear bomb to crush the final wave of the invasion, killing both nations' top-level commanders and rending a large swath of the Empire, including the capital, completely uninhabitable. As of the year 2017, the two nations have settled into an uneasy peace, with the assorted kingdoms setting their own policy while paying lip-service to the vacant Imperial throne, and Cardenas descending into a level of paranoia that would make Joseph McCarthy flinch.

Two works have been released to-date in the setting. The first, Shattered Continent: Caroline's Awakening (available for Kindle: http://www.amazon.com/dp/B00OXA3TP6

) follows Caroline Carver, a young American woman who finds herself stranded on Neue Erde. Rescued from a demon-worshiping cult by a team of mercenaries on an unrelated inter-kingdom raid, she has to get her bearings fast; her being drawn to Neue Erde wasn't an accident, and the cult's patron demon has plans for her. The second, Office Hours: Tuesday at The Office (posted for free in three parts: http://wp.me/p4wFYm-61

) follows The Professor, part-time mercenary, history lecturer and Caroline's mentor figure as he tries to take care of business at his day job at the Freistadt Institute. Operative word tries; falsely accused of murdering a well-connected Imperial nobleman, he has to talk down the grieving daughter before she shoots him, figure out who actually killed the man before the situation gets even further out of hand, and invest in a better door lock.

The Series as a whole contains examples of:

Office Hours: Tuesday at the Office contains examples of: