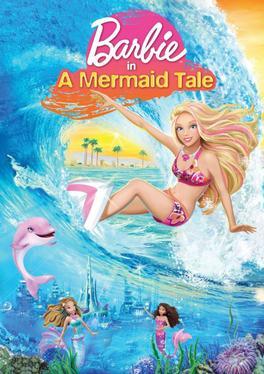 Barbie in a Mermaid Tale is a member of the Direct to Video Barbie filmography, released in 2010. It was preceded by Barbie and the Three Musketeers and followed by Barbie: A Fashion Fairytale.

Barbie plays Merliah Summers, a champion surfer who suddenly sprouts pink hair during a championship...then immediately after meets Zuma, a talking sparkly pink dolphin. Oh, and she learns that she's the half-mermaid daughter of Queen Calissa, ruler of Oceana. Which means she can breathe underwater at least.

The Reveal could not have been more timely, as Calissa's been kidnapped by her evil sister Eris, who keeps her around to make Merillia, the substance that gives the ocean life. Eris threatens dissenters with orange whirlpools that send them to the deepest trenches. As Merliah stands to inherit the throne, it's up to her to stop Eris and rescue her mother, with the help of her newfound mer-friends Kayla and Xylie.

It later had a sequel, Barbie in a Mermaid Tale 2.

What makes you different just might be your greatest strength.
— Barbie
Feedback

The opening to the movie shows Merliah, Hadley, and Fallon surfing to an English cover of a song originally from a Japanese TV show.

The opening to the movie shows Merliah, Hadley, and Fallon surfing to an English cover of a song originally from a Japanese TV show.