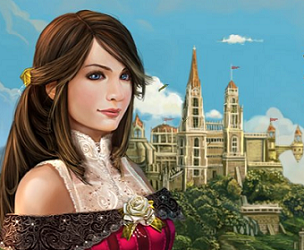 Awakening is a series of Hidden Object Games published by Boomzap Entertainment. You play as Sophia, a beautiful princess who wakes up from a century of magical sleep to find herself in a mostly empty castle. Your goal is to help Sophia discover who she is, where her family and people are, and what extraordinary destiny lies before her.
Advertisement:

There are seven games in the series.

Additionally, Big Fish Games and Boomzap released a Freemium spinoff game titled Awakening: Kingdoms, in which the player serves as the Skyward Kingdom's Royal Steward in Sophia's absence and helps restore and repair the kingdom after the events of The Skyward Castle. It is not meant to supplant the main games, but to serve as worldbuilding and run concurrent to Sophia's story. After a few months, however, Boomzap announced that Awakening: Kingdoms has been discontinued, and it is no longer available for download or play.

Not to be confused with Fire Emblem Awakening or Dragon Age: Origins – Awakening.

Tropes found in this game series include: