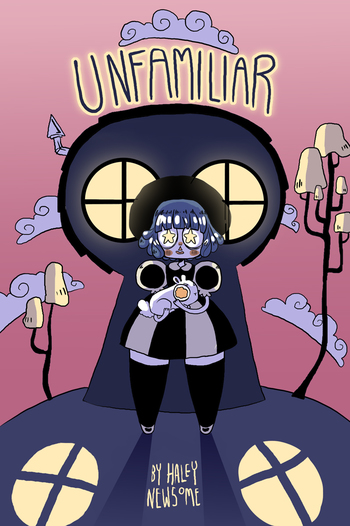 The first cover. Pictured: Planchette and her familiar Winston in front of their new house.
"Little witch Planchette is tired of living in the suburbs, so when she sees a great deal on a house in a magical town, she takes it! The only problem? It's full of ghosts! With the help of a shy siren, a cursed girl, and a pigeon witch, will she be able to exorcise her new home?"
— Description on Tapastic
Advertisement:

Unfamiliar is a Fantasy webcomic written and illustrated by Haley Newsome. It follows the adventures of the witch Planchette as she moves into a new house in a new town.

It can be found on Tapas here

Not to be confused with the fanfic of the same name.