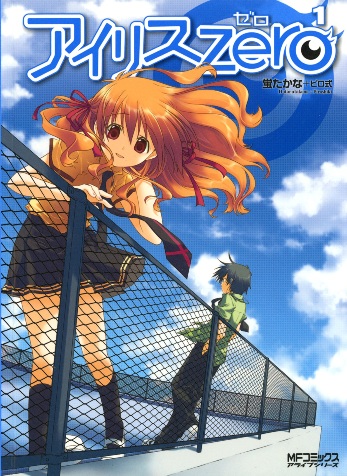 An Iris is a special power in someone's eyes that, basically, allows a person to see an Augmented Reality. These abilities range from telling what someone had for dinner to identifying someone's past lives. 27 years ago around 1% of children were born with this power; 5 years later, that began to skyrocket, so that now the 1% are the children born without it.
Advertisement:

Toru Mizushima is part of that 1%; he, like the adults, doesn't have an Iris. In other words, he's an "Iris Zero", and in the past he was a target for discrimination and was frequently bullied because of his lack of an Iris. Now he's getting by according to a principle of "minimal exposure"—to live without standing out.

Things get complicated when the popular Koyuki Sasamori suddenly appears one day in Toru's classroom and immediately asks him to go out with her... to help with something. You see, Koyuki's Iris is "to see those who are qualified" and thus she is frequently tasked to pick officials and staff members. Her task this time is to find the next student council president, and she's been looking for days but she still can't find the person suitable for the role. Koyuki then decided to simply look for the person who can help her, and apparently Toru's qualified for the job.

Although reluctant to help considering the amount of attention he'd get, Toru plays along to help her regardless, and gets Koyuki herself elected to be the student council president. Unfortunately, much to Toru's exasperation, Koyuki has already become a part of his life, with all the attention that comes with it.

This semi-fantasy manga written by Piro Shiki and illustrated by Hotaru Takana tells of Toru's time in high school as he struggles to maintain his low profile while assisting the ever-annoying (well, to him anyway) Koyuki who stands out too much. Rounding out the cast are Hijiri Shinozuka, Toru's only friend who sees past Toru for being an Iris Zero; Asahi Yuki, Koyuki's friend; Nanase Kuga, who's even more withdrawn than Toru; and Harumi Tokita, Kuga's childhood friend.

The manga began serialization in the seinen magazine Monthly Comic Alive in 2009. It went on a lengthy hiatus starting in July 2012, due to one of the creators falling ill. It resumed serialization in October 2013, picking up right where it had left off. It has slipped in and out of hiatus ever since then depending on the creator's health.

Not to Be Confused with 2 (close) characters of Mega Man X series.

Tropes regarding Iris Zero include: