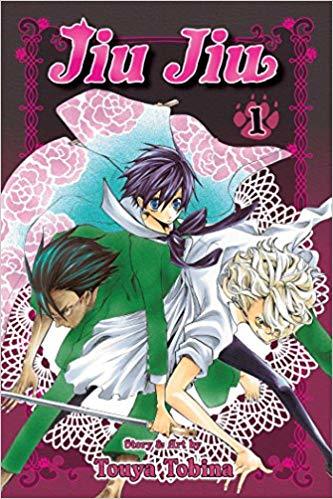 Just a girl and her dogs.
Takamichi’s Jiu Jiu Obedience Training Goals:
1. Stop them from following you to work
2. Don’t expose them to the full moon
3. Save them from execution
—Back-of-the-Book Blurb, Volume 1
Advertisement:

A five-volume manga written and illustrated by Touya Tobina that follows the adventures of a teenage demon hunter and her werewolf familiars. The first volume was published in 2009 and the series wrapped up in 2013.

Hachioji Takamichi was born into a family of "Dark Hunters": elite bounty hunters and assassins who track down demons and other supernatural creatures that prey on humans. When her beloved twin brother Takayuki is killed on a mission, Takamichi is suddenly thrust into his role as the of heir of the Hachioji clan. Mourning her brother's death and feeling the full weight of her clan's expectations, she is saved from despair by a pair of Jiu Jiu — shape-shifting, half-demon familiars — in the form of two wolf pups called Snow and Night.

Now Takamichi is sixteen years old, a high school student and an active Demon Hunter... while her familiars (who have aged at the same rate as dogs) are teenagers that can't wait to enroll in the same school as their mistress. Snow and Night may be determined to follow Takamichi and protect her from harm, but are they truly ready to go off leash...?